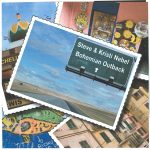 Steve and Kristi’s 2005 CD with some of their best known songs on it.

1. Harbor Island (dobro from Orville Johnson graces this song about working on Seattle’s Harbor Island)
2. Lillian’s World (a song for a trans friend of ours)
3. Superman’s Dilemma (humor with electric guitar solo from Orville Johnson)
4. On Fishermen (for the fishermen of Cordova, AK)
5. I Guess It’s Love
6. Go Out to Alberta
7. Wish You Were Here Waltz (sung by Kristi, a favorite in the folk clubs of the UK)
8. My Home In Washington
9. Moses
10. Outback of Bohemia (this is the favorite S&K song of many of their fans)
11. We’re Comin In

Steve and Kristi’s 2005 CD with some of their best known songs on it.